Code Media (2/14/2018; Analyst Michael Nathanson on where media is headed)

This is one of the most important slides we have at our firm that looks at the pace of cord cutting.  Anytime we write a note that says ‘cord cutting’ we get like 1,000 reads…it’s everyone’s favorite topic, but it’s actually kind of complicated because there’s two kinds of cord cutting.  If you look at that dark blue line that’s falling pretty rapidly, that’s the rate of cord cutting for traditional distributors.  So that’s Comcast, Charter, Dish, DirectTV…so that’s declining at 4%…and we think in 2018, it gets worse…

But, there’s something called the virtual MVPDs, that’s Hulu, YouTube TV, Sling, DirectTV Now…if I added the growth we see at those places, 4mn subs by the end of 2017, we think the rate of change is +/- 1%….we see a two-speed world.  If you are only tied to traditional distributors, you’re looking at -4%/-5% rate, if you’re lucky enough to be carried by those virtual new distributors, you’re looking at -1%. 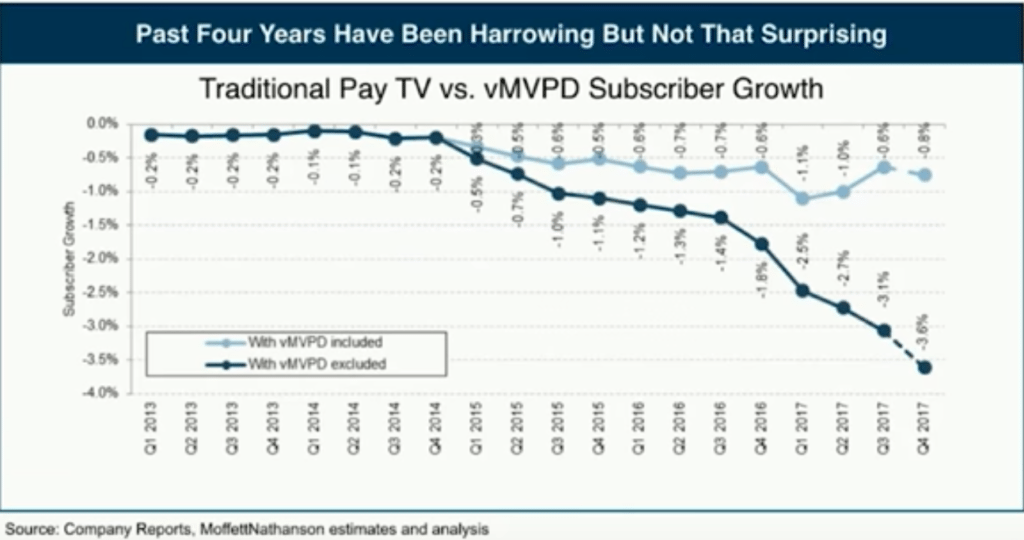 In a healthy economy, in a non-recessionary cycle, we’re looking at 0%-2% annual advertising growth rate for traditional media companies, and that’s truly worrying. 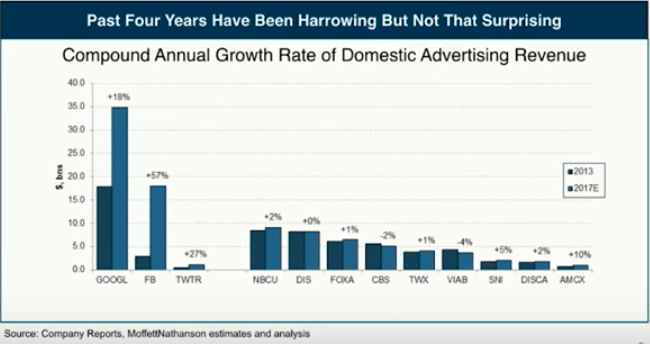 TV for the most part has held in really, really well…up until recently.  2017 was the first year in which digital advertising was a bigger segment than TV advertising. 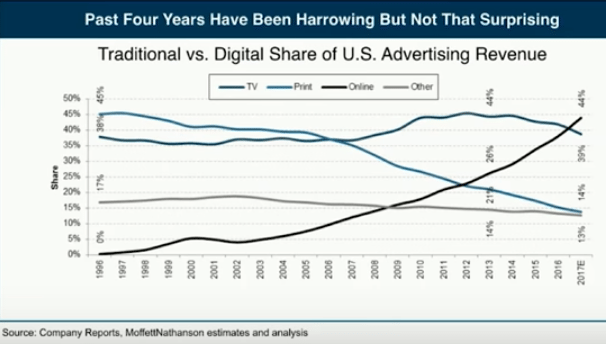 What’s happening is that digital has done an amazing job on long tail, SMB, direct response.  Facebook said a couple years ago that 25% of their advertising base [come from] their top 100 advertisers.  Why does that matter?  If you asked CBS or NBC, the top 100 advertisers are about 60% of their ad base.  What Facebook and Google have done is they’ve monetized the long tail of non-brand direct response dollars and have done it at a great, great rate.

…why you’re getting that soft advertising story in TV is that the ratings just aren’t there.

So last year Netflix spent $6.3bn on their P&L buying content, mostly television.  Their going to move to film, they’re making 80 films this year.  When you look at their P&L this year, it’s $7bn-$8bn of content spending, on a cash basis it’s $10bn-$12bn of content spending.  When you line that up with the biggest conglomerates, it’s quickly passing Time Warner, it’s bigger than Fox.  They’re reaching a size of investment spending that really challenges linear scripted networks.  Now when I back off sports, you could argue that their spending on content’s actually bigger than everyone else but NBCU in 2018.

The viewing of live content over the last 7 years (below) has essentially been flat.  On the flip side, the viewing of non-live content is down by a CAGR of 5% and that’s accelerating in 2017. 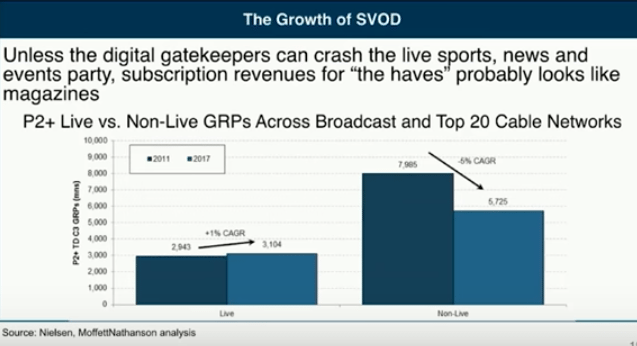 The only products out there that are capturing a high percentage of Americans in one fell swoop is live sports.  Our view is that the only advertising play that’s going to be valuable long-term is this live reach of live sports…having this type of unduplicated live reach is why the dollars have not come out of TV yet.

Cable networks driven by repeats and commodity content are in trouble (TNT, TBS, FX, USA, and Nick-at-Nite)…at some point networks that are built on repeat content are going to see big erosion and in fact, that’s what’s happened. 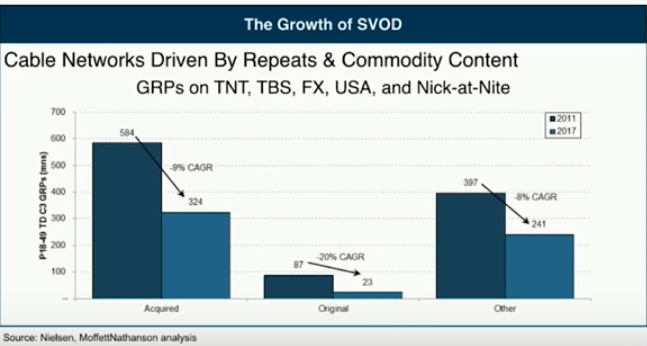 The only problem we see is this…when we do the math on skinny bundles – sports and news stripped down to $35-$40 – our math says there’s no profit there.  So you’re getting this profitless growth on the distribution side…

…now making it worse in the future is that the networks they’ve chosen to be the bedrock of those virtual services – Fox, NBC, Disney, Time Warner, CBS – is pretty much where all the growth in that affiliate fee bucket is…the growth rate for their affiliate fees is 9% in aggregate.  If you’re a virtual network, you have a $35 price point, but your cost of goods sold is going to be inflating at a very, very high rate, so at some point you have to decide whether you raise your pricing, which could limit your growth or you absorb it as a loss leading product. 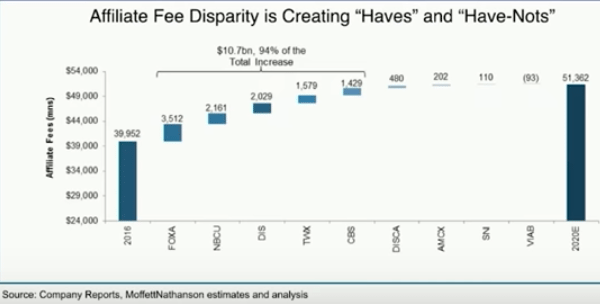 PUT – People Using TV.  “Did you use TV today”.  If you’ve got a network built on 55+, you’re not seeing the same level of decay as these younger networks.

Not a surprise that the physical bit of video has fallen from $16bn to $6bn…but what I’m here to tell you is the growth of the digital format – electronic sell-through, video on demand – is starting to slow.  We once thought that could add back the decline of physical.  It’s not happening.  The bulk of [the physical DVDs] that are bought are from Target, Wal Mart, Best Buy, and it’s just a matter of years before those companies start downsizing their carrying of physical product.  So we’re very very worried about the back-end monetization of the film business.  And that’s going to lead to more premium VoD….2017 was the worst box office year we’ve seen since 1995 and as Netflix spends more money to make better and better movies, as premium VoD windows start opening up, we see pressure on the theatrical side of the business. 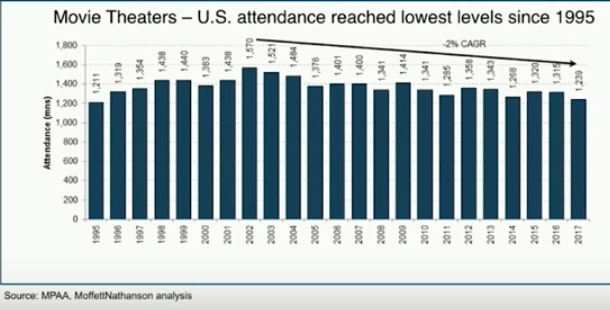 “So, first on Red Hat.  Red Hat is the worldwide leader in open source technology for the enterprise and a lot of the early block chain start-ups were…forming their own open source community projects to develop a distributed ledger either for the cryptocurrency side or for use in the enterprise.  So, we got a lot of invitations to come and have conversations with ‘how can Red Hat help me form a sustaining open source community effort and then once I do, can you help me with governance and licensing’.  These are all areas that Red Hat was founded on, so it was a natural.  So, for about 6 to 8 quarters, those were the nature of the conversations that we had.

Roll forward to today, we have an in-market offering that we call Blockchain-as-a-service that builds on some of the other capabilities that are already in market…blockchain has board level attention at Red Hat and we are putting resources behind it.

What Red Hat’s interest in the blockchain space is distributed ledger use cases for the enterprise.  We’re not investing a whole lot of time and energy in cryptocurrency side…so you made mention of the consortiums, Hyperledger (150+ members) and Ethereum Alliance (over 200 members), there’s a few others like Dockchain in the healthcare space, there’s similar ones that are being spun up in Europe and Asia, and I would say virtually all have come to Red Hat and said…’would you be interested in running a support model around my distributed ledger’…while Red Hat sees this as a strategically important initiative, at the current time we don’t have plans to release a Red Hat Enterprise blockchain.

What…are the challenges to getting blockchain or distributed ledgers more broadly accepted, the consortium efforts are a wonderful one and we are members of the Hyperledger consortium, we’re looking at the Ethereum Alliance, but in order [to get] broad based acceptance, eventually we believe that somebody’s going to need to step up and provide a governance model and support model.  That’s not Red Hat today.  What we do believe is that any distributed ledger…all need to run on a supported enterprise infrastructure, so that’s a supported operating system, being deployed in a cloud or hybrid environment….so what we announced about 6 months ago was a hybrid cloud offering called blockchain-as-a-service with our good partner BlockApps.

If Red Hat’s strategy is not to release Red Hat Enterprise blockchain, what is Red Hat’s strategy?  It’s really about providing an enterprise ready platform for you to run your distributed ledger application on…So what we announced, which is something that Microsoft had previously announced with BlockApps, the worldwide leader of what’s known as Blockchain as a service, it’s a way to quickstart a PoC, in a 6 to 12 week project you can spin up your use case, develop it on an application, develop a set of APIs, and develop a small, working application.  What Red Hat has done is taken from just a PoC capability to an enterprise ready capability by integrating it with our PaaS offering, which is called OpenShift, so that when clients get ready to go from PoC to production systems, they’re already deployed on those enterprise ready systems […]

Probably smart contracts are the ‘X’ factor, the killer app in distributed ledgers for the enterprise, and smart contracts are now being integrated, they’re a core part of the Ethereum stack and they’re now being integrated into Hyperledger as well, and some of the other distributed ledgers for the enterprise.  From an infrastructure perspective, that’s the killer app.  What is the killer app from a use case perspective, I don’t think there’s one…

Where we find success is deploying distributed ledger technology behind the firewall that doesn’t require 500 parties to agree on a technology standard…let’s do something like think about a large financial institution that does a general ledger consolidation, and all the steps in the process that occur along the line, whether you’re a subsidiary or a branch of a bank, you’ve got to consolidate your financial statements over say 500 or 5,000 different entities…Now today, with the OCC and everyone that’s looking over your shoulder, you’ve got to report who made changes to that data all along the line.  So, that kind of process, completely behind the firewall, under the control of financial institution, is something that lends itself very well to a blockchain or distributed ledger system […]